Office shading solar control solutions will increase office productivity which decreases the number one expense most companies overlook. To understand how, one must go back to understanding what makes a productive building, and why productivity should be a consideration in building design.

Office shading solar control solutions have traditionally been presented as a way to achieve energy cost savings by using natural light and solar heat gain control to lower utility bills, and to reduce the size of HVAC and lighting systems. By far the biggest amount of money spent annually on a commercial operation, however, isn’t energy-related. It’s people-related. Wages and other workforce costs are the biggest chunk of operating expense, and it’s in this area where shading solutions can also have an impact. 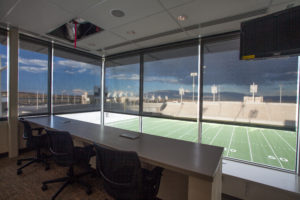 According to the “Productive” section of the National Institute of Building Sciences’ Whole Building Design Guide, typical total life cycle costs of private sector buildings are $200 per square foot per year for salaries; $20 for amortized bricks/mortar cost; and $2 for energy. Based on those numbers, even a very small improvement in productivity can have a huge impact.

In addition to those five basic principles, the WBDG has this to say: “Buildings can be more effective, exciting places to work, learn, and live by encouraging adaptability, improving comfort, supporting sense of community, and by providing connections to the natural environment, natural light, and view.”

Based on these factors, window shades and other solar control solutions can have an impact on improved productivity as part of an overall daylighting strategy.

THE CASE FOR NATURAL LIGHT

The human body needs natural light. It needs natural light to create enzymes and proteins for a healthy life. Without enough natural light, our circadian system gets out of sync and can no longer properly regulate things like sleep, alertness, and concentration. According to a 2000 article in the Journal of Occupational Rehabilitation, lack of sleep makes it more difficult to make decisions, and a 1995 Journal of General Internal Medicine report links insomnia to poor job performance.

In “The Socioeconomic Impact of insomnia: An overview,” L.A. Chilcott and C.M. Shapiro further estimate that insomnia costs the United States economy more than $30 billion annually (in 1994 dollars).

The key is natural light. Just having an effective electric lighting system does not replace our need for it. A 1994 study showed there was a statistically significant improvement in job performance in offices with windows.

The Center for Building Performance and Diagnostics at Carnegie Mellon University looked at the impact of daylighting on productivity and recorded 40% gains.

Evidence also suggests that workers make fewer mistakes in environments with plenty of natural light. One 2003 study of pharmacists found a 3.5% to 2.6% decrease in dispensing errors when light levels were increased from 450 lux to 1500 lux.

So natural light—and the means of getting it into a building—should be an essential part of designing a building for maximum productivity.

There’s more to it than just the light itself, however. Access to window views to the outside also gives workers a connection to nature which has also been found to have an impact on mood, satisfaction, and performance. A 2003 study showed the mood of daytime workers was significantly better than nighttime workers in the same office with windows. 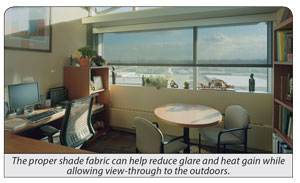 With the incorporation of more windows into building design, however, there can be some negatives. Glare, solar heat gain, and direct sun on workers’ eyes or workspaces can make it harder to perform basic work functions and actually lower productivity.

The WBDG states “The science of daylighting design is not just how to provide enough daylight to an occupied space, but how to do so without any undesirable side effects. Office shading solar control solutions, including both exterior and interior shading systems, are thus an important part of designing a productive building.”

In 2006, Heifer International opened its new headquarters in Little Rock, Arkansas. The building was designed with sustainability and natural light in mind. It included energy-efficient plate glass windows for passive solar heat and indirect light, and a curved shape to capture the maximum amount of sunlight. These and other sustainable construction practices helped the building achieve a Platinum LEED® certification from the U.S. Green Building Council. But when the facility opened, a glaring problem emerged: Workers couldn’t use their computer stations on the south side of the building due to the sun load coming through the extra large windows. While fixed sun shades were in place to help with passive solar control and glare, workers were getting additional glare from the water which surrounds part of the building. The problem was resolved by adding interior window shades, with a five percent openness factor to still allow views through to the outside.

In addition to glare, solar heat gain can also be a problem. Thermal comfort contributes to job performance and productivity, and the WBDG recommends a holistic design approach to deal with this, including the use of office shading solar control solutions and products. 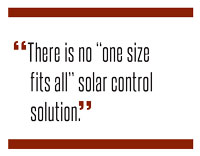 Dealing with this issue is where an exterior system has the advantage because it prevents a large part of the sun’s energy from reaching the glazing and entering the building.

Energy from the sun is short wave and carries little heat. Heat is only produced when the solar energy is absorbed by a surface (e.g. carpeting, furniture, clothing, or skin) and is then radiated as long wave infrared (IR) energy. Reflected solar energy is not an issue—it remains short wave and does not cause any heat gain. Transmitted energy is absorbed by surfaces in the building and is radiated as heat. Most of this heat is then trapped inside the building, particularly if low-emissivity (low-e) glazing is used.

If the solar energy does not get into the building, it does not have to be dealt with.

Because every building type, design, and location is different, there is no “one size fits all” office shading solar control solution. There are many types of systems—from venetian blinds to fixed louvers to fabric/roller products—that can be used, depending on the situation. Whichever type of solution is required, however, having a system that can react according to the prevailing conditions, while retaining local control so individual comfort is taken into account, is important.

If you would like to consult one of SAVE Electronics’ solar control experts about exterior Solar Control Solutions or to learn about our interior shading solutions, contact our shading control experts here. 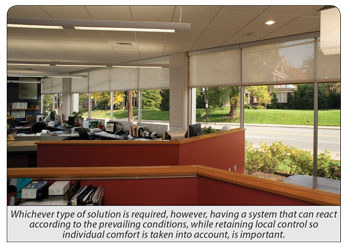