What is the difference between interlaced and progressive scan video? 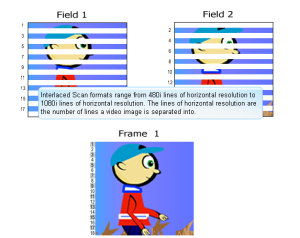 Interlaced Video: Video sources that are listed with the letter i are called interlaced. An example of this would be 480i or 1080i. Interlaced video displays even and odd scan lines as separate fields. The even scan lines are drawn on the screen, then the odd scan lines are drawn on the screen. Two of these even and odd scan line fields make up one video frame.
Because we are only being presented with half an image at a time, albeit at a 1/60th of a second interval, the consequences of using interlaced are predictable. Because you’re only capturing half of the image at a time, movement within the frame (due to either camera movement or subject movement) may cause motion artifacts.

Progressive Video: Video sources that are listed with the letter p are called progressive scan signals. Examples of this would be 480p, 720p or 1080p. Progressive scan video content displays both the even and odd scan lines (the entire video frame) on the TV at the same time. This means you will avoid the problem of motion artifacts.